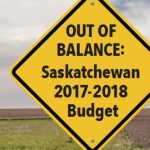 REGINA: A new report commissioned by the Canadian Union of Public Employees has found that the proposed taxation changes in the 2017-2018 budget will disproportionally impact low income families and individuals.

The report, titled: Out of Balance: Saskatchewan’s 2017-18 Budget, found that the proposed taxation changes significantly erode tax fairness. One of the most substantial changes in the budget was the increase to the generally regressive Provincial Sales Tax (PST), which increased from 5% to 6% and was extended to tax items such as insurance premiums and goods such as snack foods, children’s clothing, and restaurant meals.

“The government says that the proposed tax changes will ‘ensure that Saskatchewan’s taxes remain fair to all residents.’ However, the tax changes proposed by the government disproportionately affect those who are least able to pay,” said Robin Shaban, the economist and public policy consultant who authored the report. “Meanwhile, Saskatchewan’s highest-income earners face very little change in the taxes they pay, relative to how much they earn. Some of Saskatchewan’s high-income earners may even enjoy a tax cut in the coming year.”

In fact, if the Saskatchewan government’s tax changes are fully implemented, the typical family that earns between $17,800 and $24,100 will see a tax increase of almost the same magnitude as the tax break that families with incomes over $186,700 will receive.

The report also shows that enhancements to the Low-Income Tax Credit (LITC) do not completely correct for the inequitable effects of the government’s tax changes.

“The inequity of the tax changes proposed by the Sask Party government is even more striking when we view its impact by gender,” said Shaban. “Women are significantly under-represented in the high end of the income distribution and make up the majority of people who are in the lower-half of the income spectrum. Since the tax change of the Saskatchewan Party government are regressive, it follows that these changes will more negatively impact women.”

Robin Shaban is an economist and public policy consultant, a member of the Alternative Alberta Budget project, and columnist for the CCPA Monitor. She is also a former officer of the Competition Bureau and has a master’s degree in economics from Queen’s University in Kingston, Ontario.