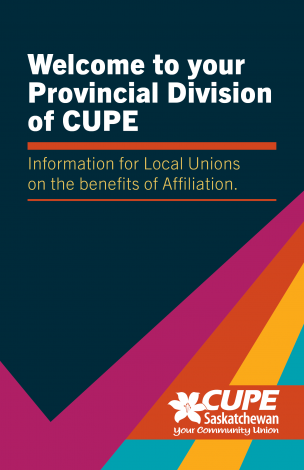 To order print copies of the booklet, contact the CUPE Saskatchewan office.

Welcome to your provincial division of CUPE in the province of Saskatchewan – known as CUPE Saskatchewan.

When CUPE Local Unions stand together, the strength of our membership allows us to be a powerful voice.

Locals know we are all affected by the privatization of public services, the weakening of workplace rights, and government decisions or mandates.

With affiliation to CUPE Saskatchewan, your CUPE Local Union can build strength and be part of solidarity that has a province-wide reach.

There can be no more important reason to affiliate than to stand together for our members.

CUPE Saskatchewan unites CUPE locals across the province and works at the provincial level for legislative, policy and political change. Together, we stand up for fairness, resist the privatization of public services, defend workers’ rights and improve the political environment for collective bargaining. CUPE Saskatchewan hosts community engagement events, coordinates campaigns and activism across sectors within the union and across the province, and locals are provided additional resources and educational opportunities.

Build your Local Union strength and solidarity through affiliation with CUPE Saskatchewan.

To request print copies of the booklet, please contact the Division Office at 306-757-1009 or email Jodi.