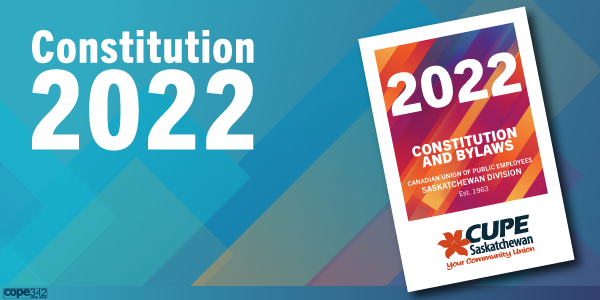 CUPE Saskatchewan is the provincial division of the Canadian Union of Public Employees (CUPE).

CUPE Saskatchewan unites CUPE Local Unions to speak with one strong collective voice and works at the provincial level for legislative, policy, and political change on issues affecting CUPE members and the public services they provide each and every day.

The Constitution and Bylaws of CUPE Saskatchewan were last amended by the 2022 Annual Convention.

Constitutional amendments included an increase to the travel allowance rate per kilometre which took effect as of June 8, 2022. CUPE Saskatchewan’s commitment to truth and reconciliation was incorporated into the statement of principles, and the CUPE Equality Statement and Code of Conduct were fully incorporated into the provincial constitution.

Print copies are available for Local Unions by contacting the Division Office.