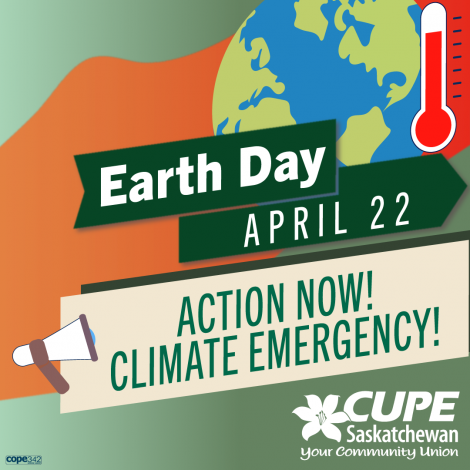 April 22 is Earth Day – a day to recognize the climate change emergency and the action needed to restore our earth. With the world continuing to head for a catastrophic temperature rise and human caused destruction threatening the earth’s ecosystems needed to sustain life, Earth Day 2021 is an important time to renew our resolve to demand more urgent environmental action from governments, employers and within our communities in the transition to a zero-carbon economy. Action on the environment to build a green recovery from the COVID-19 pandemic will safeguard our health in the future and that of our only planet.

2021 will launch the UN Decade on Ecosystem Restoration proclaimed by the United Nations General Assembly, set to officially commence during World Environment Day on June 5, which aims to halt the already significant degradation of ecosystems and achieve global goals of restoration on every continent and in every ocean. The decade coincides with the deadline for the 17 Sustainable Development Goals and timeline identified by scientists as the last chance to prevent catastrophic climate change.

Acting with urgency on climate change is the defining challenge of our times. CUPE Locals are invited to sign the CUPE Climate Change Emergency Declaration and to act on the steps outlined in the declaration.

Local Unions that sign the environmental declaration are asked to email the CUPE National Office at: enviro@cupe.ca

Three days of virtual climate action and earth day celebrations are being held on April 20, 21 and 22 at www.earthday.org

On April 21, a multilingual education summit, titled: “Teach for the Planet: Global Education Summit,” is being held featuring prominent activists and focusing on the crucial role that educators play in combating climate change.

On April 22, a live digital Earth Day event will be held at EARTHDAY.ORG
You can also follow the events on Facebook at www.facebook.com/EarthDayNetwork