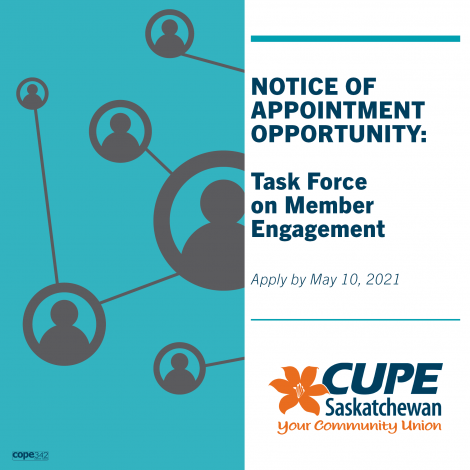 The Saskatchewan Division of the Canadian Union of Public Employees (CUPE Saskatchewan) is currently accepting applications from members of affiliated Local Unions to serve on the Task Force for Member Engagement.

Applications for consideration of appointment must be received by no later than Monday, May 10, 2021.

CUPE members in good standing of affiliated Local Unions are eligible to apply.

Positions on the ad hoc Task Force on Member Engagement will be for a term ending March 2022.

The role will require attendance at periodic meetings called by the Chair.

Appointees will be compensated for lost wages through union leave from work when required to attend meetings. If in-person meetings are held when it is considered safe to do so in the future, costs and expenses related to the attendance of meetings will covered as per the expense policy.

ROLE AND STRUCTURE OF THE TASK FORCE

Resolution R-45 adopted by the 2020 Annual Convention of CUPE Saskatchewan directs the establishment of a Task Force on Member Engagement with the following mandate:

The Task Force will deliver a report to the 2022 CUPE Saskatchewan Annual Convention, as well as any related action items in the form of resolutions for members to consider.

The time period for the task force to carry out its mandate was further extended by resolution R-14, adopted by the 2021 Annual Convention of CUPE Saskatchewan.

The current membership of the Task Force includes:

According to the structure outlined by resolution R-14, the Task Force will have a maximum of seven (7) members appointed by the CUPE Saskatchewan Executive Board. Members of the Task Force must include a mix of Executive Board members, local leaders, and rank-and-file members that reflect the diversity of CUPE.

In your application, you must demonstrate that you meet the following requirements:

How do I apply?

Candidates who wish to apply should complete and submit an application form.

Applications must be received by the Division Office no later than Monday, May 10, 2021.

Results of the selection process will be sent to all candidates at the email address provided on their application.