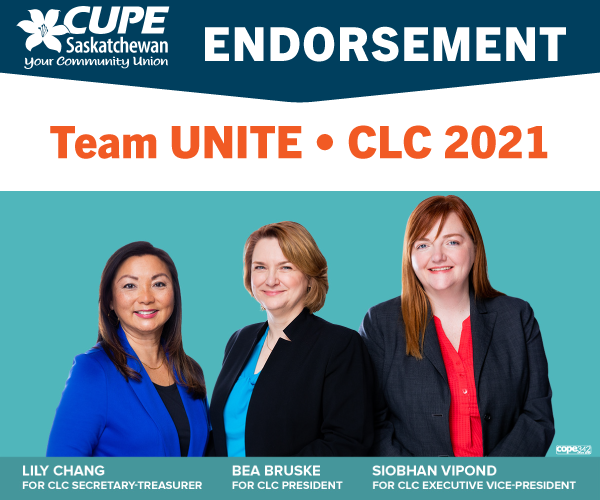 At its meeting on April 16, the Executive Board of CUPE Saskatchewan passed a motion to endorse the candidates of Team Unite in the upcoming elections at the 2021 CLC Convention being held virtually on June 16 through to June 18, 2021.

“With Team Unite, we can reset the Canadian Labour Congress with renewed leadership to build a stronger labour movement,” said Judy Henley, President of CUPE Saskatchewan. “I encourage all CUPE locals in Saskatchewan to support this outstanding team of progressive women to unite the labour movement by sending delegates to the upcoming virtual CLC Convention in June.”

CUPE locals are encouraged to register delegates for the virtual CLC convention and to support the election of Team Unite and important constitutional amendments put forward by CUPE.

Every CUPE local is affiliated directly to the CLC through the National Union. Delegate entitlement is one (1) delegate per local with a membership of 1,000 members or less, plus an additional delegate for every major portion of 500 members. Additional credentials are available by contacting Tania Jarzebiak at the CUPE National Office. Registration fees are $150 per delegate.