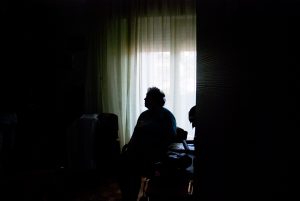 The COVID-19 pandemic has sounded the alarm on the state of long-term care in Canada.

Canadians have been horrified to learn that four out of five lives lost due to COVID-19 have been residents or workers in long-term care facilities – the worst record in the developed world. A report from the Canadian Forces, who were deployed to help manage outbreaks in several care homes, put into gruesome detail just how deep the crisis in long-term care had become, and sent shockwaves across the nation.

The election on October 26 is our best chance to reverse course and fix long-term care. Seven months after the novel coronavirus arrived, there’s no longer any excuse for being unprepared, and there’s no excuse for continued inaction.

For years, our union has been calling for urgent action to fix long-term care here in Saskatchewan, while the Sask Party under different leaders did the opposite, and cut long-term care to the bones.

The Sask Party has left the physical infrastructure of long-term care facilities to rot to the point that facilities in Grenfell and Regina have been forced to permanently close. And it’s the expensive, for-profit options that are left to fill the gaps.

To make things worse, in 2011, the Sask Party axed rules that required at least two hours of personal care per day per resident. To put that into perspective, most experts agree that long-term care residents should receive a minimum of 4.1 hours per day of hands-on care – but our seniors in Saskatchewan today aren’t even guaranteed two.

In 2019, the Saskatchewan Health Authority painted a bleak picture in its survey of long-term care facilities: critical staffing shortages and burnout, delayed responses to call bells, and residents unable to get more than one bath a week. And that was before COVID-19 struck.

We know what it will take to fix long-term care – because we’ve been telling this Sask Party government for years.

We need regulations that guarantee a minimum of 4.1 hours of hands-on care per resident every day.

We need to boost staffing levels in order to reduce staff burnout and improve the quality of care for residents.

We need to make long-term care jobs stable and full-time, so that workers do not have to work second or third jobs, putting residents and other staff at more risk during a pandemic.

Everyone in Saskatchewan knows someone who lives or works in a long-term care home. On October 26, let’s remember them when we go to the voting booth, and elect a government that will make these life-saving solutions a reality.

Mark Hancock is the National President of the Canadian Union of Public Employees (CUPE). Judy Henley is the President of CUPE Saskatchewan. CUPE represents over 13,000 health care workers across the province.