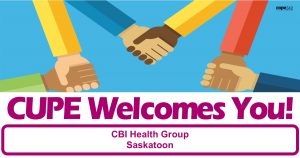 The organizing drive started earlier this year. The application to the Labour Relations Board was made July 2, 2019, which triggered a mail-in secret ballot process. CUPE was successful in the vote, which was counted on August 14, 2019 and a Certification Order was issued this week.

“We are happy to welcome the workers at CBI Health Group into our growing union. Joining CUPE is one of the best decision workers can make to improve their job and secure fairness in the workplace,” said Tom Graham, president of CUPE Saskatchewan. “We will work with our new members to fight for fair wages and a legally binding collective agreement.”

Next steps will include electing a Local executive and a bargaining committee to negotiate a first collective agreement.

CUPE is the largest union in the province, representing 30,000 members across a variety of sectors. CUPE represents over 30 locals in the Community Based Organizations sector.