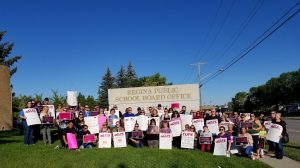 CUPE members rally in front of the Regina Public School Board office on September 3, 2019

Over 100 education support workers started the school year off by taking a stand at the Regina Public School Board meeting.

Members and supporters of CUPE Locals 3766 and 650 held an information picket to demand a fair deal for education workers.

Both locals have been bargaining for over two years and both locals have received strong strike mandates from their members. The main issues are the Employer’s concessions, including a two-year wage freeze and paltry wage increase in years three to five.

“Back to school would not be possible without the hard-working members of CUPE. It is time that the Employer recognizes this at the bargaining table and stops pushing concessions that will hurt our members,” said Jackie Christianson, president of CUPE Local 3766. “Our members are united, and we deserve a fair deal.”

“Our members are being ignored,” says Glenn Douglas, president of CUPE Local 650. “Almost every other school division in Saskatchewan has been able to reach a collective agreement, and yet our Employer won’t even make a reasonable offer. In fact, over the last two years, they have only bargained with us for three days.”

Both locals have upcoming bargaining dates, and are urging members and supporters to apply pressure on the school board.

CUPE represents close to 7,000 education support workers across the province of Saskatchewan, including over 800 support staff at the Regina Public School Board.