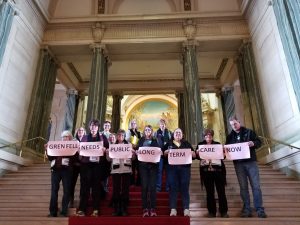 More than a dozen people from the communities of Grenfell and Broadview joined the NDP at the Legislature today to call on the government to restore publicly funded, publicly delivered long-term care in Grenfell. This call has been consistently made in the nearly seven months since the long-term care centre in Grenfell was shut down because it was riddled with mold and asbestos.

“The people of this community have been working tirelessly to raise money to get their facility back, but they’ve been left in the dark by the Sask. Party,” said NDP Seniors Critic Danielle Chartier. “They don’t want those jobs that serve the community to go to a private corporation, they want them to remain public.”

“It’s been heartbreaking to see seniors from Grenfell relocated far from their home communities, their support networks and sometimes their spouses,” said Mary Pillar from Grenfell, a care worker from Grenfell who worked at Pioneer Village until it closed and now commutes to work elsewhere. “My message to the Premier is simple: Grenfell needs a new, publicly funded care home.”

“We are very concerned that the government will push ahead with a private nursing home company or personal care home to fill the gap, instead of ensuring that families in Grenfell and surrounding area have access to affordable, publicly delivered nursing home care,” said Sandra Seitz, President of CUPE 5430, who represents healthcare workers in the area. “It is time for the government to step up to the plate and ensure that Grenfell has a public long-term care home in its community.”

“Communities throughout the province are struggling with their long-term care centres because the Sask. Party simply let infrastructure deteriorate and crumble,” said Chartier. “Now, instead of hearing what residents are saying, they’re opening the door to the private sector coming in and taking over. It’s shameful that these families should have to beg the government to get what they need: a safe, quality, publicly funded long-term care home for Grenfell.”