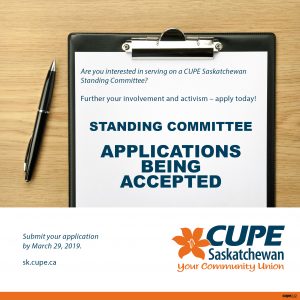 Are you interested in serving on a CUPE Saskatchewan Standing Committee? Further your union involvement and activism – apply today! Deadline for applications: Friday, March 29, 2019.

Applications are now being accepted for positions on Standing Committees of CUPE Saskatchewan. In odd years, one position on each Standing Committee is appointed for a two-year term following the Annual Convention.

The following committees have one position available:

Any member interested in appointment should complete and submit an Application for Appointment (two-page form) by Friday, March 29, 2019.

To be eligible for appointment, you must be a member in good standing of a CUPE Local Union affiliated to CUPE Saskatchewan. Consideration will be given to those applicants who were delegates at the most recent convention. Appointments will be ratified at the May meeting of the Executive Board. Limited positions are available.

Goals and Objectives of Standing Committees are detailed in Appendix “C” of The CUPE Saskatchewan Constitution and Bylaws.

If you have any questions or require clarification, contact the CUPE Saskatchewan office at 306-757-1009.

Submit your application one of the following ways: