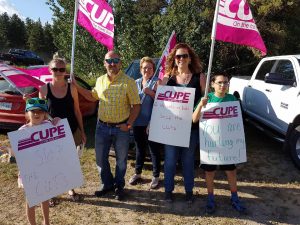 Members of SGEU and CUPE picketed outside Sask Party MLA Nadine Wilson’s Annual General Meeting for the Sask Rivers constituency to protest her support for the devastating 2017 provincial budget cuts and to highlight the impact that cuts are inflicting on northern communities.

The group is part of a broad coalition that is organizing protests at Sask Party events throughout the summer as a way of reminding government that its decision to cut services and programs has consequences.

“Prince Albert and the north in particular have been hit hard by the budget cuts,” said Bob Bymoen, president of SGEU. “With the shutdown of the STC, cuts to municipalities, and the already existing funding shortfalls for northern services, it’s clear that the Sask Party government doesn’t prioritize northern communities.”

Rally participants raised concerns about the 2016 cuts to Prince Albert Mobile Crisis, which forced the organization to shut down daytime services for the surrounding area. The lost funding was not restored in the 2017-18 budget. In addition, concerns were raised about the cuts to programs and reduction of support staff hours at Saskatchewan Rivers School Division.

“When you have higher rates of child poverty in the north, and you’re continuing to underfund services for families year over year, you end up putting a strain on other services that aren’t as well-equipped to help these families,” said Bymoen. “The Sask Party is making our most vulnerable residents pay for government’s mistakes.”

“The provincial budget hurt working families and rewarded corporations and high income earners with tax breaks. The Sask Party needs to walk back its ill-advised budget cuts.” said Tom Graham, president of CUPE Saskatchewan. “We will continue to speak out and attend events like this one until the government finally listens to the people of Saskatchewan.”