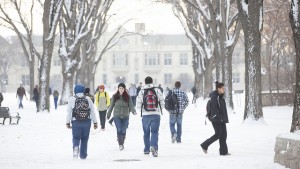 While the University of Saskatchewan says that jobs will not be lost due to provincial cuts to education announced this week, the Canadian Union of Public Employees is concerned about the decision to drop $7.9 million for capital spending on crucial work such as maintenance.

The union is disappointed in the Brad Wall government for failing to adequately plan for Saskatchewan’s future.

“When you are forcing cuts on the educational institutions that train the next generation, and slashing spending on maintenance and research, it is safe to say that Brad Wall is looking for short-term fixes to long-term issues,” said Tom Graham, President of the Canadian Union of Public Employees Saskatchewan.

The union is concerned that the provincial government is downloading the cost of poor planning onto post-secondary institutions which then pass along cuts to workers and students.

“In an election year, the Sask Party refuses to acknowledge that they mismanaged the boom and are now slashing where they can,” said Graham. “The Sask Party is running election ads saying the opposition would take the province backwards, but it’s the current government that is starting to look reminiscent of decades past, when the Devine Conservatives drove Saskatchewan bankrupt.”