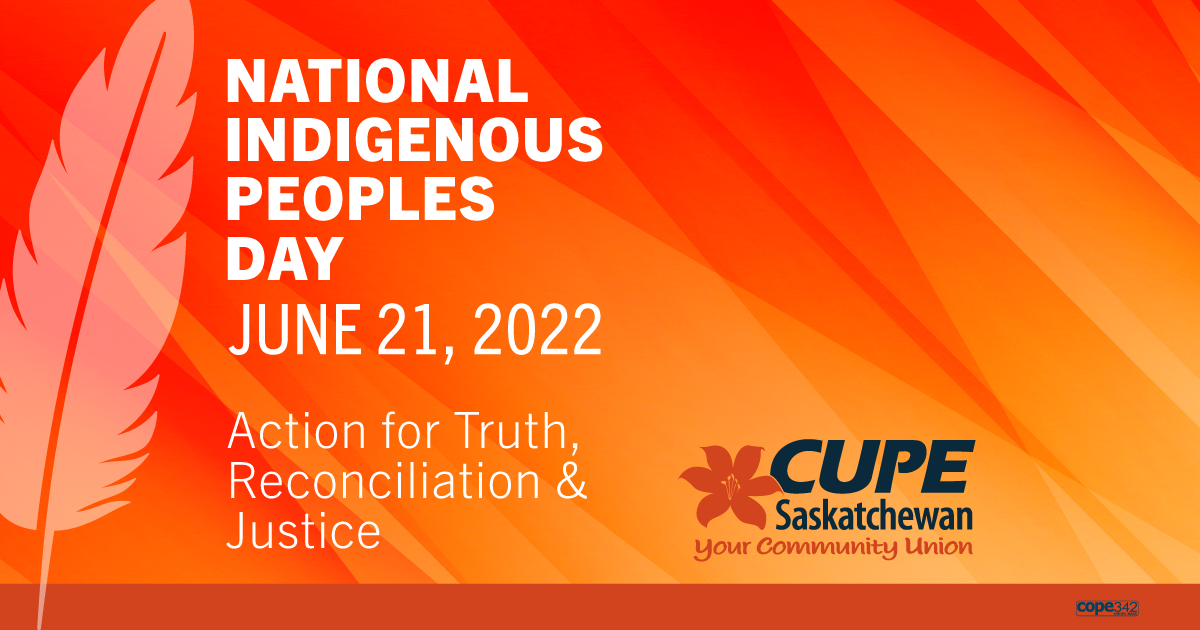 National Indigenous Peoples’ Day on June 21 is an annual opportunity to honour and celebrate the diverse cultures, linguistic diversity, history and contributions of First Nations, Métis and Inuit peoples. It is also a time to reflect on the ongoing harms of colonialism and the need for greater action for truth, reconciliation and justice. As Saskatchewan’s largest union and Canada’s largest union, CUPE stands in solidarity with Indigenous nations, communities and organizations and is committed to continuing to work towards reconciliation, justice and to respect our ongoing treaty relationships.

Reflections on a challenging year and the need for greater action

The painful legacy of violence through colonialism continues as we collectively mourn the ongoing recovery of Indigenous children buried on residential school grounds. CUPE Saskatchewan stands in united grief and solidarity with Indigenous nations and communities, Residential School Survivors and their families, and the families of children who never made it home. Every child matters. Many of the Indigenous members of CUPE are themselves either Residential School Survivors or the children and grandchildren of Survivors, and in many cases all three.

This year the 2022 Progress Report on the Murdered and Missing Indigenous Women and Girls and 2SLGBTQQIA+ People National Action Plan was released, along with renewed calls for more accountability and action from government to meet the Inquiry’s 231 Calls for Justice. More urgent action must be taken by the federal government, and all levels of governments, to end violence against Indigenous women, girls, and 2SLGBTQQIA+ people.

Our union is striving to take ongoing action for truth and reconciliation by educating CUPE members on the truthful legacy of the residential school system and the ongoing harm Canada’s assimilationist policies and laws have on Indigenous peoples. We also stand in solidarity in the calls for justice.

Last year, The United Nations Declaration on the Rights of Indigenous Peoples (UNDRIP) Act became law in Canada. The original declaration was passed by the majority of member states of the United Nations on September 13, 2007, and thus serves as the principal international framework to build and rebuild relationships with Indigenous people in recognizing fundamental rights. Canada’s Truth and Reconciliation Commission, which issued its final report in June of 2015, frequently references the UNDRIP, making the declaration the most comprehensive standard to which reconciliation should occur. Canadian governments have been slow to abide by the declaration that underscores the basic fundamental principles of Indigenous Peoples’ rights including: Free Prior and Informed Consent, the Right to Participate in Decision Making, Self-Determination, Sovereignty, and the recognition of Treaties. Read more about the declaration and its importance here.

CUPE’s Water is life campaign raises awareness about the ongoing struggles of Indigenous peoples, and shows how CUPE members can listen, learn and act.

The first phase of CUPE’s Water is life campaign has been launched today, starting with educational materials to raise awareness of the impacts of not having access to safe drinking water for Indigenous peoples in Canada. Check out the brand-new fact sheet  and resource list.