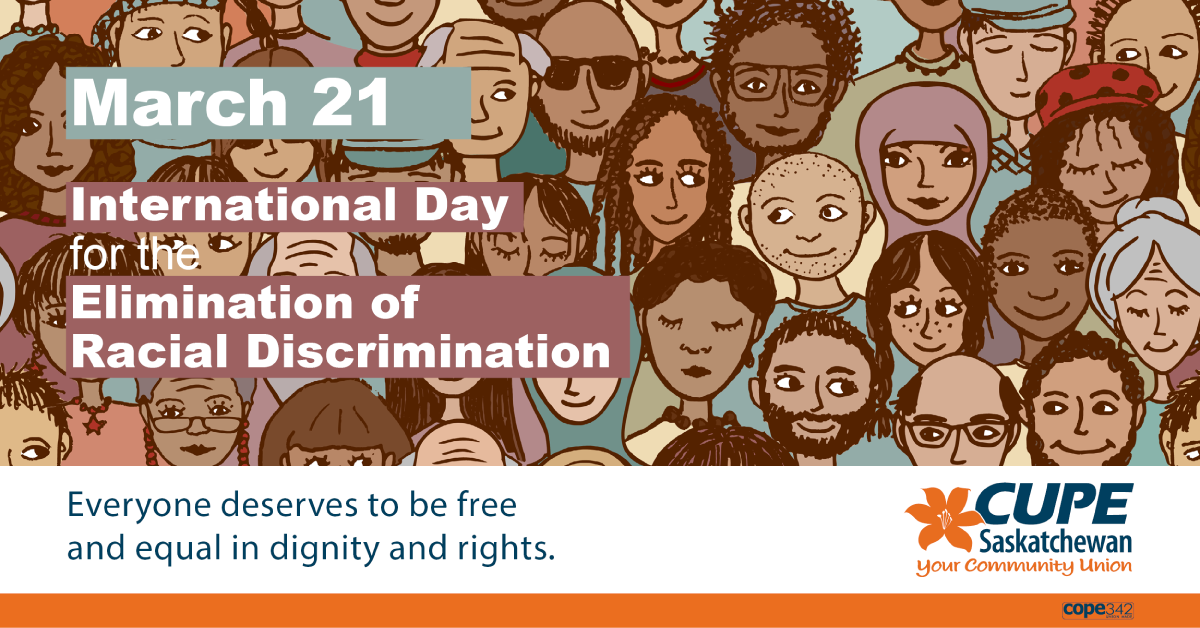 The International Day for the Elimination of Racism is a time to renew our resolve and our responsibility as fellow union members to confront racism and discrimination in all of its forms, wherever and whenever we encounter it. We all must ensure our workplaces, public services, and all levels of our union are safe, reflective of diversity, and meaningfully inclusive. Voices for Action Against Racism is the theme of this year’s global observance, encouraging people everywhere to mobilize against racial discrimination and injustice, and to ensure a safe and supportive environment for people to speak up.

According to a report recently released by Statistics Canada, police-reported incidents that involve a hate crime motivation have increased in Saskatchewan by 60% per capita from 2019 – 2020 and have increased across Canada. This worrisome increase is a reminder that words, as well as actions, cause hurt and suffering. We all have a collective responsibility to challenge and prevent hate and discrimination.

The COVID-19 pandemic has exposed deeply rooted inequalities in our society and the impact of discrimination and systemic racism that cause disproportionate health impacts and greater loss of life among Indigenous, Black, racialized communities, and disadvantaged groups. Unequal access and underinvestment in public services, unequal living conditions and a lack of public housing by governments, and an economy that places profit before people shows the urgent need for a recovery from the pandemic that demands a more just and equitable future.

Unions bring workers together in solidarity to fight for fairness– working to break down economic and social inequalities, advocating for improved access to public services, taking action to defend workers’ rights and human rights, and standing together to confront hate, fear, and discrimination in all its forms. This work continues in the knowledge that all of us have a role to play in ending racism and championing human rights, understanding that together in solidarity we can make lasting structural change in our society that ends systemic racism.

The General Assembly of the UN proclaimed March 21 the International Day for the Elimination of Racial Discrimination by resolution adopted in 1966. The day commemorates the incident on March 21 in 1960 when police opened fire and killed 69 people and wounded 180 others while they were peacefully demonstrating against apartheid “pass laws” in the township of Sharpeville, South Africa (view the United Nations video about Sharpeville) . Unions were at the heart of the anti-apartheid movement, and unions such as CUPE remain dedicated to being at the heart of the fight against racism.

Racism only divides us. As union members, we know that in solidarity there is strength.

• Read the Canadian Labour Congress report on Islamophobia and how to fight it in the workplace.

• CUPE’s International Day for the Elimination of Racial Discrimination poster.