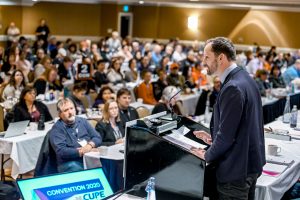 Saskatchewan NDP leader Ryan Meili brought a packed room of CUPE members to their feet in Saskatoon on Friday morning, after a speech vowing to fight the Sask Party’s attacks on workers’ rights and public services.

Meili said an NDP government would put people first and focus on strengthening public services, innovating for a green economy, and working alongside First Nations and Metis people to close gaps in health and education.

“Putting people first is what our democracy is about. That’s what CUPE is about, and that’s what New Democrats are all about too,” said Meili. “We’re here to send a message loud and clear to the people of this province; New Democrats are in this for you.”

On Wednesday, delegates unanimously passed a resolution affirming CUPE Saskatchewan’s affiliation to the Saskatchewan NDP for the upcoming election.

Even though the provincial election is scheduled for October 26, rumours are flying that Premier Scott Moe will ignore the scheduled election date and send Saskatchewan to the ballot box early. “Whatever Scott Moe’s reasons for an early election might be,” joked Meili, “I don’t think it’s ever too early to say goodbye to this Sask Party government.”