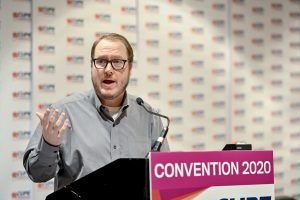 Public-private partnerships (or P3s) don’t just cost the taxpayer more – they make delivery of public services more complicated, inefficient, and dangerous, according to Simon Enoch at the Canadian Centre for Policy Alternatives.

Enoch presented a glimpse of his findings, in a forthcoming titled “The Untold Truths of P3s in Saskatchewan”, to delegates at this week’s CUPE Saskatchewan division convention in Saskatoon. Enoch noted that the Sask Party government has shown a preference for the design-build-finance-maintain (DBFM) style of P3s. “It’s usually the F in there that gets the most attentions, because it means much higher financing costs for the public,” said Enoch. “But we should be paying more attention to the M, because these contracts last up to thirty years, and that has its own costs.”

Stories abound in Saskatchewan about P3 schools where teachers have to get forms signed to pin learning materials onto the walls or just open a window because of burdensome maintenance contracts. Enoch’s project interviewed 18 public sector employees who work in P3 facilities like schools and hospitals to see how P3 contracts kneecap the delivery of public services.

The study finds that P3 maintenance contracts sow confusion and uncertainty over maintenance responsibilities in P3 facilities, create inefficiencies in decision-making, and put workers and users at risk because of flaws in the design-build phase.

Not only that, said Enoch, but P3 contractors rarely recognize the circumstances of the buildings they’re operating in, like schools and hospitals, describing instances where contractors left saws plugged in and unattended in school hallways while students were in class.

After Enoch’s presentation concluded, Ron McLean, a member of CUPE Local 3730 who works in a P3 school, rose to speak at a microphone, telling delegates: “Nobody is ever going to rent you a building for less than the mortgage. These guys are only in it for the money. And we’re going to be paying for these buildings for the rest of our lives.”