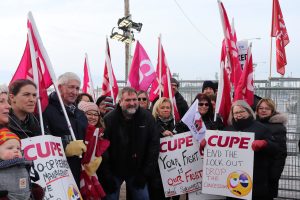 Mark Hancock, CUPE National President, joined CUPE’s provincial union leadership in Regina today at the Unifor Local 594 picket line in front of the Co-op Refinery to bring a message of solidarity from Canada’s largest union. Today marks day 49 of the lockout imposed by the management of the highly profitable Co-op Refinery in what has become a flash point in the fight against employer-led attacks on workers’ pensions since police escalated tensions by arresting Unifor’s National President and union officials on the picket line Monday night in Regina, Saskatchewan.

“The fight for good pensions and a decent retirement is going on right here, right now. And CUPE will stand with you in this fight, because we know our pensions are under the same threat, and because it is what we do in the union movement. We stand with each other!” said Hancock.

Nearly 800 members of Unifor Local 594 at the Co-op Refinery in Regina have been locked out in freezing conditions since December 5, 2019. Federated Co-operatives Limited (FCL) owns the Co-op Refinery Complex in Regina. The employer has locked out its workers in an attempt to force through concessions and gut the pension plan promised to workers at a time the company itself is hugely profitable.

View the full video of the Solidarity Rally held on the picket line in Regina on January 22, 2020, here.

Learn more about the issues and how you can show your support: www.boycottco-op.ca