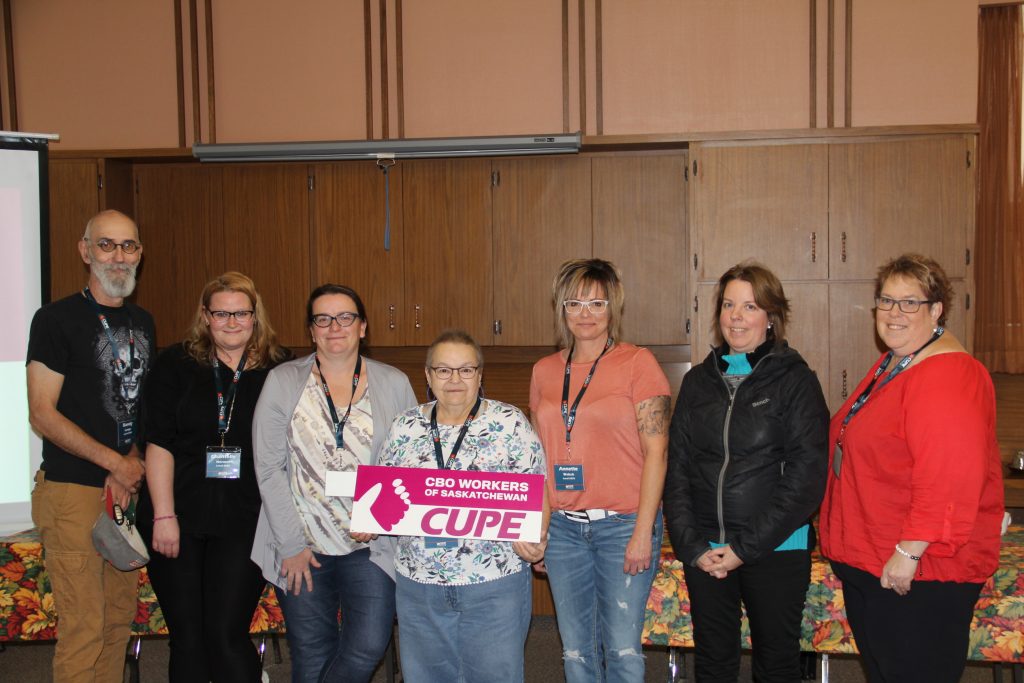 CBO Workers’ Appreciation Day in Saskatchewan was marked by a historic meeting in Regina to build union strength with the establishment of a new committee to enhance sector-wide solidarity in addressing the challenges workers face in the sector that provides child care, social care and vocational training for people living with disabilities, and community services such as shelters and additions treatment through multiple agencies in various cities and towns. There are approximately 31 CUPE Local Unions across Saskatchewan in the community-based organizations (CBO) sector.

On November 5 and 6, 2019 in Regina, delegates from CUPE Local Unions representing members employed by various community-based organizations and agencies across Saskatchewan gathered together to establish a new provincial sectoral group and to consider its structure, passing the following motion:

WHEREAS many Local Unions represent workers employed by various community based organizations, non-profit organizations, co-operatives, associations and/or registered charities across the province and it is the desire of these Local Unions to coordinate activities to promote their common interests and collective welfare;

THEREFORE BE IT RESOLVED that a provincial sectoral group be established for the CBO Sector of the Canadian Union of Public Employees (CUPE) in the province of Saskatchewan to be known as the “Community-Based Organizations Workers Steering Committee of CUPE Saskatchewan,” and referred to as the “CUPE CBO Workers of Saskatchewan.”

The motion along with bylaws that determined the committee’s composition, structure and affiliation fees were passed by delegates representing CUPE Local Unions at the founding meeting. Elections were also held among delegates for positions on the sector committee’s first executive board. The newly-elected executive (pictured here) includes the following elected positions:

While the initial stage in the sector group’s establishment has been affirmed by delegates representing CUPE Local Unions, each Local Union will next determine through membership vote if they will voluntarily affiliate to the sector committee should their local bylaws not already provide direction and authorization to join. The affiliation process is expected to take a few months, though the committee is set to begin addressing common challenges faced by CBO locals including: the need for multi-year stable, predictable funding from the provincial government to CBOs in order to provide adequate staffing levels and programming; addressing the growing violence workers face on the job; more training and support for workers on the front line of providing care for those with complex needs; and advocating for better wages, pensions and benefit plans for employees in the sector.

Local Unions can contact Nathan at the Division Office 306-757-1009 for more information about the sector committee affiliation process or to contact the committee. Further communications will be sent to locals in the near future.