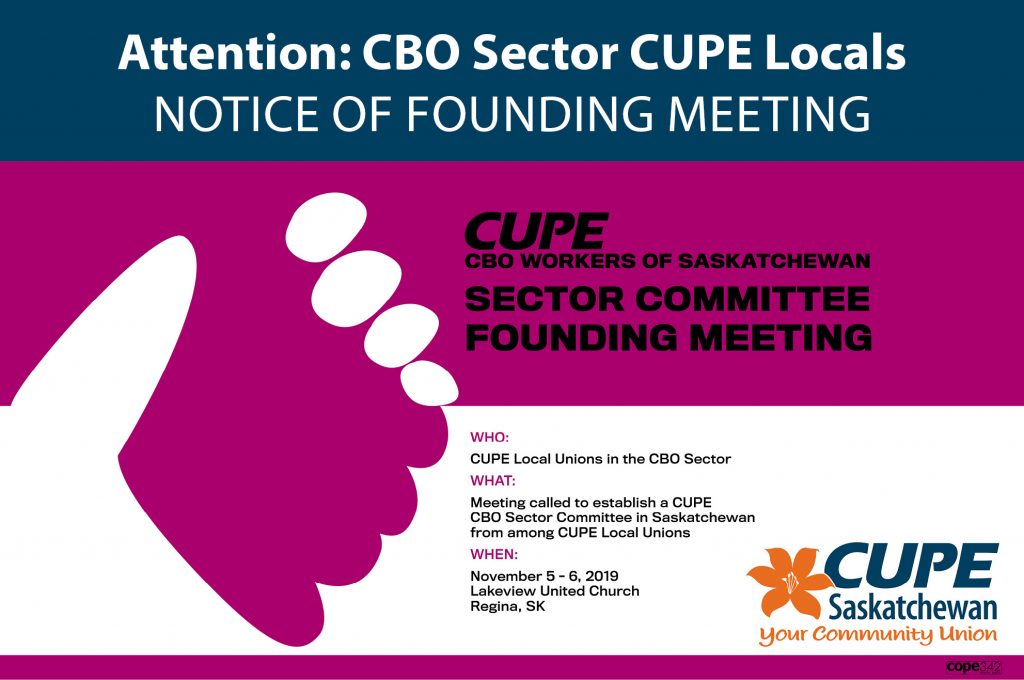 CUPE Local Unions in the CBO Sector have received notice of a founding meeting to establish a sector committee from among CUPE Local Unions. The meeting will be held on November 5 to 6, 2019 in Regina.

There are approximately 31 CUPE Local Unions across Saskatchewan in the community-based organizations (CBO) sector. By joining together in a CBO Sector Committee, locals in this sector can coordinate campaigns, participate in political action on shared goals and initiatives, and act as a united voice at a provincial level.

What is a CBO Sector Committee?

CUPE Local Unions can decide to form a sector committee (also known as a steering
committee or provincial sectoral group) that allows for locals in a particular sector across the province to join together in a coordinated body to advance common interests and objectives for their membership.

Why hold a Founding Meeting?

In order to establish a CBO Sector Committee, a Founding Meeting must be held to establish bylaws that determine how such a committee would operate, to decide the affiliation levy (also referred to as the dues rate) each local would pay to fund the activities of the committee on an on-going basis, and to elect members to serve on the Executive Board of the committee to begin its activities.

What happens at the Founding Meeting?

TO REGISTER: Send completed Registration Forms into the CUPE Saskatchewan Office by email to: j.reavley.cupe@sasktel.net

THE FOLLOWING DOCUMENTS WERE INCLUDED WITH THE FOUNDING MEETING NOTICE: