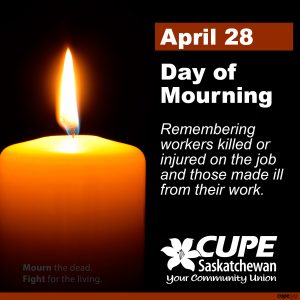 April 28 is a National Day of Mourning to remember those who tragically lost their lives while at work and to recognize those who endured an injury or acquired an illness or disease as a result of their work. Sadly, 48 Saskatchewan people died as a result of their job last year (2018) from occupational disease and traumatic events, not including farm-related fatalities or other workplaces that are not covered or reported by workers’ compensation. The total number of workplace fatalities and total overall injury rate increased from 2017. Over 22,343 workplace injuries occurred in Saskatchewan workplaces last year and were accepted by Saskatchewan’s Workers’ Compensation Board (including time loss claims and no time loss claims), among the over 28,952 claims reported to WCB.

On the National Day of Mourning for Persons Killed or Injured in the Workplace, we remember those we have lost and we renew our resolve as workers and union members to defend and improve workplace safety standards.

Attend a ceremony of observance in your community on Sunday, April 28, 2019. Click “Continue Reading” for event listings.

Labour History to establish a National Day of Mourning for Workers

The National Day of Mourning on April 28 commemorates workers who have been killed, injured or suffered illness due to workplace related hazards and occupational exposures.

In 1984, the Canadian Union of Public Employees (CUPE) began to celebrate Workers’ Memorial Day. On April 28, 1985, the Canadian Labour Congress officially declared it an annual day of national remembrance. In December 1990, The Workers Mourning Day Act passed in the Parliament of Canada, which established April 28 as the annual National Day of Mourning for Persons Killed or Injured in the Workplace.