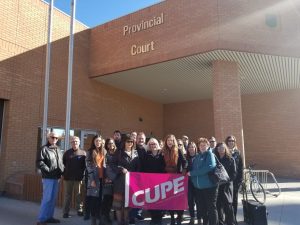 CUPE National President Mark Hancock and Saskatoon Tribal Chief Mark Arcand joined with members of CUPE 1949 today to speak out about the cuts to Legal Aid and the impact it is having on the community.

“After years of chronic underfunding, and more intense and unsustainable workloads, we are at a breaking point. We love our jobs but more and more we are not being given the tools to do them well. Our staff has been cut back as Legal Aid files remain steady and, in some cases, processes more and more files each year,” said Meara Conway, Vice-President of CUPE Local 1949. “This decision to fire an already small team of committed Legal Aid workers and contract out thousands of files to private lawyers shows that CEO Goebel is out of touch with the needs of our clients. The in-house public staff model at Legal Aid Saskatchewan should be protected and expanded, not dismantled and privatized.”

A member of the union, former Legal Director of the Saskatoon Criminal Office and long-time advocate, Val Harvey has been threatened with a law-suit by Craig Goebel for speaking out against the cuts.

“In Saskatoon, the criminal courts are more backed up as a result of these changes and new arrests are spending longer in custody without bail. Privatization comes with a price tag for the justice system, which is already under extreme fiscal pressures,” said Harvey. “We need to speak out for our members and our clients. Threats and intimidation will not silence us.”

“These cuts and privatization are also costing the people of Saskatchewan more. Legal Aid Saskatchewan’s eligibility requirements are among the hardest to meet in the country.” said Hancock. “CUPE will continue to stand by our members, and fight for the important services they provide. Legal Aid should be kept public and expanded, not privatized and cut.”

Saskatoon Tribal Chief Mark Arcand spoke about the impact these cuts have on Legal Aid clients – a high percentage of whom are Indigenous.

In Saskatchewan, Indigenous people experience more systemic barriers and have less access to the legal system. By reducing access to justice, to the people most disenfranchised by race, class, ethnicity and gender, the management of Legal Aid Saskatchewan is continuing a history of neglect and marginalization of Indigenous people. Members of CUPE Local 1949 are asking that the Legal Aid Commission meet with workers to resolve the situation.

“Instead of hearing our concerns, our stories from the trenches, our requests for resources and support, Mr. Goebel has ignored, threatened, and pressed on. Not surprising, the organization has lost faith in Mr. Goebel. Our members voted an overwhelming 95% in favour of a non-confidence vote,” said Conway.

“Our staff just want to be able to do our jobs – jobs we love for people we care about. Today, we are here to request that the Legal Aid Commission meet with our executive to ensure that the rights of the most vulnerable people be respected and upheld in this province.”