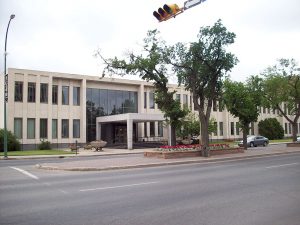 A member of CUPE Local 1949 has been threatened with a lawsuit in retaliation of her efforts to represent the six members who were laid off when Legal Aid Saskatchewan privatized the majority of duty counsel work in the Saskatoon office this summer.

“Instead of trying to rebuild trust with our members and addressing the lengthier remand rates that have resulted from his privatization scheme, Goebel is attempting to muzzle our members”, said Wanda Towstego, President of CUPE Local 1949. “The result of these threats may have a chilling effect on our membership who may hesitate to exercise their rights as a union member for fear of retaliation”

CUPE Local 1949, the union who represents all non-management staff at Legal Aid, recently conducted a membership wide vote of non-confidence against Mr. Goebel. The result was overwhelming, with 95 percent of members voting against the actions of Mr. Goebel and in favour of the non-confidence motion.

“CUPE represents over 665,000 members across Canada who are standing behind Ms. Harvey, our members, and the Legal Aid clients who have been hurt by these cuts,” said Ann Iwanchuk, CUPE National Staff Representative.