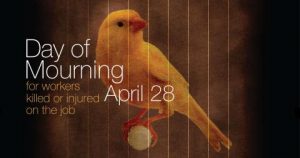 April 28 is a National Day of Mourning to remember those who tragically lost their lives while at work and to recognize those who endured an injury or acquired an illness or disease as a result of their work. Sadly, 27 Saskatchewan people died as a result of their job last year (2017), not including farm-related fatalities or other workplaces that are not covered or reported by workers’ compensation. Over 7,888 workplace injuries occurred in Saskatchewan workplaces last year and were accepted by Saskatchewan’s Workers’ Compensation Board, among the over 28,952 claims reported to WCB.

On the National Day of Mourning for Workers Killed or Injured, we remember those we have lost and we renew our resolve as workers and union members to defend and improve workplace safety standards.

Attend a ceremony of observance in your community on Saturday, April 28, 2018. Click “Continue Reading” for event listings.

MOOSE JAW
Saturday, April 28, 2018
Moose Jaw Union Centre (1402 Caribou Street)
2:00 p.m.
Weather permitting, the event will be held outside at the Day of Mourning Cairn or inside the building if the weather is inclement.

NORTH BATTLEFORD
No information at this time.

PRINCE ALBERT
No Information at this time.

This year (2018) marks 34 years since CUPE’s National Health and Safety Committee first proposed the idea of a National Day of Mourning for workers killed or injured on the job.

April 28 was proclaimed by then-National President Jeff Rose at a health and safety conference in early 1985. In the same year, the Canadian Labour Congress and affiliated unions adopted the day across Canada. In many communities, local labour councils bring different unions together in ceremonies to honour workers who have been killed and injured – and to vow to stay vigilant.