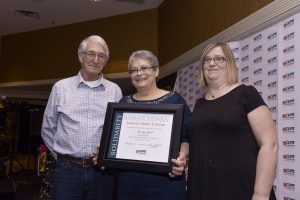 Since first becoming a CUPE member in 1981 when she began working in health care at the Meadow Lake hospital, Marilyn Goll has been active on her local union’s executive and dedicated to helping fellow members.

Goll recalls her first case as a union executive member involved appealing the denial of disability benefits on behalf of a member, and the early successful appeal and satisfaction of restoring benefits for a member and their family has motivated Goll throughout her career to be actively involved in CUPE. For Goll, the joy of helping others you work alongside and looking out for their well-being is what makes a union a strong family.

Marilyn Goll is regarded by many as a mother figure not only to her family, but to the union local, with the care and endless hours, evenings and weekends, dedicated to helping members. She is also known for not being afraid to speak up for members and the union contract.

“CUPE is strong because of caring members like Marilyn Goll who show a passion for members’ rights and well-being,” said Judy Henley, CUPE Saskatchewan Secretary-Treasurer, in presenting the award during the Convention 2018 banquet.