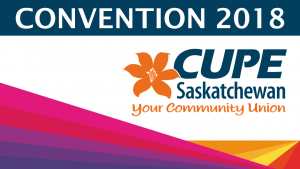 Delegates representing CUPE local unions from across the province will gather in Saskatoon at the Radisson Hotel (405 20th Street East) on March 7 – 9, 2018 for the Annual Convention of CUPE Saskatchewan.

During convention, delegates will set the direction for the year ahead, elect members to leadership positions, hear reports about the important work being done by our union, and engage in discussions about issues facing CUPE members and the public services we provide.

CUPE is Saskatchewan’s largest public sector union representing over 30,000 members across the province working in a variety of public service occupations including: Healthcare, K-12 education, universities, civic services in cities and towns, community based organizations and child care centres, and various boards and agencies.

The following is an outline of the agenda. All events are at the Radisson Hotel Saskatoon unless otherwise indicated.

Consult the Convention Program for a detailed agenda with speakers.