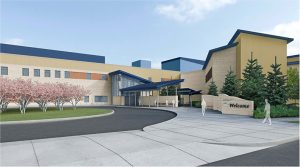 REGINA – The Saskatchewan government needs to tell the public whether the construction and full contract obligations of the Saskatchewan Hospital North Battleford are in jeopardy after news of the collapse of UK-based Carillion, whose Canadian branch Carillion Canada Inc. is a half partner in the consortium awarded the public-private partnership (P3) contract to construct and maintain the new Saskatchewan Hospital in North Battleford. Following the yet-to-be completed construction, Carillion was to be responsible for building maintenance and lifecycle obligations under the thirty-year P3 privatization contract.

“Entering into P3 privatization arrangements are always a risk despite the sales pitch,” said Tom Graham, President of CUPE Saskatchewan. “P3s are more costly than traditional public procurement. If the private sector company goes bankrupt, it’s the public sector that ends up picking up the expensive pieces. We need to know what will happen with Carillion’s project in North Battleford and what it’s going to cost us,” added Graham.

Carillion, one of Britain’s largest construction companies with extensive operations in Canada, employs over 6,000 workers in Canada and is involved in many P3 projects, including the replacement of the mental health facility in North Battleford. The Globe and Mail reported that the British government may be taking over some of Carillion’s projects following their bankruptcy and liquidation as many public services could be left with no workers to perform vital services such as cleaning and maintenance as soon as Wednesday and construction work on public infrastructure could come to an abrupt halt.

“When public services and infrastructure are privatized through risky P3 contracts, the public is left paying a high price and the Carillion corporation collapse could leave Saskatchewan with an even bigger bill.”

CUPE Saskatchewan will be sending correspondence to SaskBuilds, the province’s Crown Corporation responsible for P3 privatization contracts, to answer the questions and concerns following the Carillion’s collapse.

The Saskatchewan Hospital North Battleford was expected to be completed in June of this year. The project has been criticized for its costly maintenance contract, which was higher than the maintenance budget for the entire former health region.