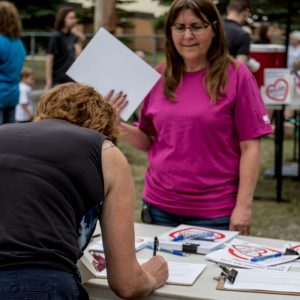 Residents of Ituna, SK, gather on August 31, 2017, to save lab services facing cuts.

Over 200 residents of Ituna, Saskatchewan, gathered on Thursday, August 31, 2017, to save their community’s lab services from being cut from five days a week to only two – significantly reducing access to health care for the town and surrounding area.

Residents of the central Saskatchewan town located 165 kilometres north of Regina gathered for a barbecue, signed petitions, and heard from speakers including the Mayor of Ituna, representatives from CUPE 4980 and CUPE 4552, and CUPE Saskatchewan President, Tom Graham, about the negative and far-reaching impact the cut to lab services will have on Ituna residents in accessing such tests as blood work, X-rays, ECG tests and pacemaker checks as well as the Ituna Health Centre lab’s role in coordinating the tests and results critical to cancer treatments.

The speakers and residents in attendance expressed concerns the significant reduction in lab hours will make retaining a certified laboratory technologist to run the lab especially difficult, along with the ability to keep the town doctor, and the exorbitant cost of excessive travel or ambulance fees that could result when town residents, long-term care residents, and residents with intellectual disabilities in supported living face the need for laboratory tests and the town’s lab is closed for days at a time.

Signatures are being collected on a petition calling for a reversal of the cuts to Ituna’s lab services, which the health region plans to make effective October 1, 2017.

Concerned residents are encouraged to contact the local MLA for Last Mountain-Touchwood and the Minister of Health to stop the cuts to lab services.

Residents of Ituna, SK, gather on August 31, 2017, to save lab services facing cuts.