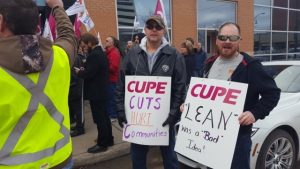 REGINA: Documents obtained through an access to information (ATI) request by the Canadian Union of Public Employees (CUPE) show that the Saskatchewan government is still spending tens of millions of dollars on Lean or Kaizen staff across the province, despite the public backlash and poor track record.

The Ministry of Health documents show that there are 17 continuous quality improvement offices (formerly known as Kaizen Promotion offices) in health regions that employed 175.4 full time equivalents (FTEs) in 2016. Salary and benefits for these teams from 2012 through to December 31, 2015 total $54.24 million. In 2015, there were 190 FTEs in health care working in Lean or Kaizen positions.

“It is appalling that the government is still spending money on the failed Lean initiative instead of investing in frontline health care workers,” said Sandra Seitz, president of the CUPE Saskatchewan Health Care Council. “How can they justify wasting tens of millions of dollars on Lean initiatives while they are charging patients for more services, laying off frontline workers, and demanding wage rollbacks?”

Last year, a study by the School of Public Health at the University of Saskatchewan said for every dollar saved by Lean, the government has spent $1,511. The report also showed Lean had a negative impact on staff morale. Recently, the Star-Phoenix reported on a new study from a University of Saskatchewan economics professor that the implementation of Lean cost up to $49.6 million from 2012 to 2014.

“Many thought that the government got out of the Lean business when they cancelled the costly contract with John Black consultants. This response to the ATI request shows that the government is still spending million on Lean, despite the overwhelming evidence that it does not save money,” added Seitz.

“As frontline health care workers, we have the knowledge and the expertise to improve our health care system. A health system full of gurus who received training in a Lean program developed in a car factory is not a prudent way to save money.” said Seitz. “The Saskatchewan government needs to stop funding Lean initiatives and put that money back into frontline health care services.”