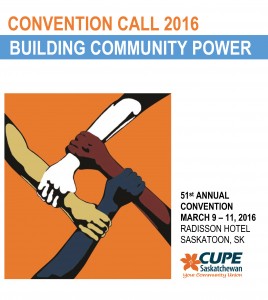 Delegates representing CUPE locals from across the province will gather in Saskatoon from March 9 – 11, 2016 for the CUPE Saskatchewan Annual Convention. The theme for this year’s convention is Building Community Power. During the three-day convention, delegates will set the direction for the year ahead, elect members to leadership positions, approve financial statements, learn about the work being done by our union and discuss the issues facing CUPE members and the public services we provide.

This year marks the 51st Annual Convention of CUPE Saskatchewan since its establishment in 1963. For over 50 years, CUPE Saskatchewan has united CUPE locals in our province to help build the power of workers and local communities, to defend the public services that serve all people in Saskatchewan, and to fight for social justice.

Join us as we renew our commitment to Building Community Power!