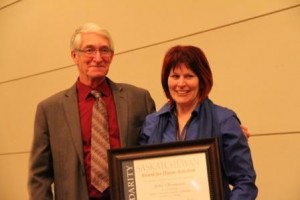 “Sister Jackie Christianson is known for her passion, the time she devotes to members, and her tireless commitment advocating on their behalf,” said Tom Graham, President of CUPE Saskatchewan, while presenting the award.

Sister Christianson is also the recipient of the 2015 Labour Community Service Award presented at an award ceremony held on February 27, 2015. The award, sponsored by the Regina and District Labour Council and the United Way of Regina, recognizes a union member who has demonstrated outstanding service and dedication to the community through volunteer work.