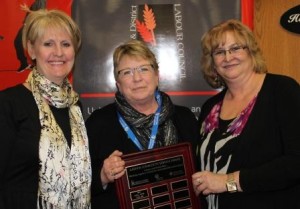 As a member of CUPE for over 30 years, Carla has served in many capacities for her local, provincial and national union including the position of CUPE 974 President, Recording Secretary for CUPE Saskatchewan, and has volunteered her time on a variety of CUPE committees. Presently, Carla serves as the Alternate Boards and Agencies Sector Member on the Executive Board of CUPE Saskatchewan, and serves on the CUPE National Political Action Committee.

In addition to her ongoing union activism, Carla is well known for her progressive political volunteerism and her extensive community service. Carla serves as a board member of the Saskatoon Community Clinic and Saskatchewan Health Coalition, is actively involved in the Student Wellness Initiative Toward Community Health (SWITCH), and has dedicated countless volunteer hours with Kinsmen Telemiracle.