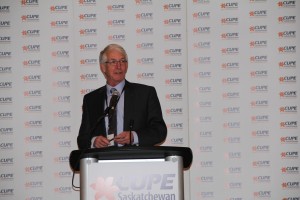 REGINA – “From the outright privatization of health care laundry to the aggressive expansion of public-private partnerships (P3s), Saskatchewan people are paying a high price for the provincial government’s privatization agenda.” That was the opening message from Tom Graham, President of CUPE Saskatchewan, in his remarks welcoming over 250 registered delegates and guests of CUPE Saskatchewan’s 50th Annual Convention.

“Putting people out of work, increasing costs for Saskatchewan residents, and handing over control of vital community infrastructure and services does not make a stronger province.”

“Saskatchewan people can count on CUPE to be a strong unyielding voice for the community ownership and control of public services, and pointing to the overwhelming evidence that costly P3 mistakes in other jurisdictions are not worth repeating,” concluded Graham.

The two-and-a-half day convention runs from March 4 – 6, 2015 and the full agenda is available online at www.cupe.sk.ca. Media are invited to attend, and are asked to register on-site at the Delta Hotel, Campania A.

CUPE Saskatchewan is the province’s largest union, representing over 29,000 members working in health care, municipalities, the K-12 school system, universities, libraries, community based organizations, and a variety of provincial boards and agencies.

For more information or to arrange interviews, please contact: