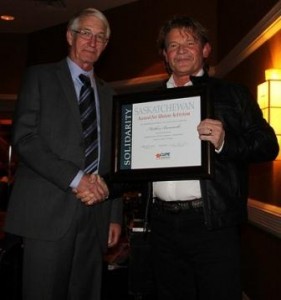 Matthew (Matt) Baraniecki, member of CUPE Local 59 (City of Saskatoon), was recognized with the Saskatchewan Activist Award on March 6, 2014 during the CUPE Saskatchewan Annual Convention.

Baraniecki has been a member of CUPE Local 59 for 40 years, and has been an active executive member for 30 of those years serving in many roles such as Steward, Secretary Treasurer, Area Vice President, and President of Local 59.

“One of the greatest tests as a union member and as a treasurer for your local is during a strike and making sure your members have the resources to stand for what’s right,” said Baraniecki recalling the strike of 1994 when CUPE 59 members stood firm against a wage freeze.  Baraniecki also noted the struggle to achieve joint job evaluation to ensure members are fairly compensated for the work they do.