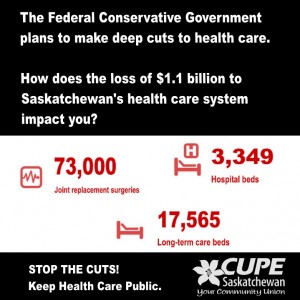 REGINA – Today marks the end to stable health care funding with the expiry of Canada’s Health Accord which will lead to cuts of $1.1 billion to Saskatchewan’s share of Federal Government funding over ten years beginning in 2017.

“The end of Canada’s Health Accord marks the beginning of federal health care funding cuts to the province of Saskatchewan of $1.1 billion after the next Federal election,” says Tom Graham, President of the Canadian Union of Public Employees (CUPE) Saskatchewan. “The Federal Conservative Government is planning to take $1.1 billion away from Saskatchewan’s health care system – the equivalent to 3,349 hospital beds or over 73,000 joint replacement surgeries – and, in doing so, is making a political decision to undermine our public health care system and put it at risk of further privatization.”

The Health Accord refers to legal agreements signed among federal, provincial and territorial governments in 2003 and 2004. It sets out a common vision for health care in Canada and guarantees stable federal health funding, escalating at 6% a year. The expiry of the Health Accord on March 31, 2014, means provinces and territories stand to lose a total of $36 billion over 10 years through cuts to the Canada Health Transfer.

“Registered nurses know the system must be redesigned to better meet the growing demands of our ageing population, whose medical needs are both increasing and becoming more complex,” says Tracy Zambory, President of the Saskatchewan Union of Nurses (SUN). “A renewed Health Accord will commit provincial governments to substantive and meaningful program improvements with targeted timelines, and ensure everyone has equal access to health services regardless of their ability to pay – a value Canadians hold dear.”

Without a renewed Health Accord, funding will be tied to economic performance and a province’s population, while current obligations to adhere to the Canada Health Act will be eroded. This sets Canada on a path towards inequality and privatization.

“The expiry of the Health Accord and cuts to health care funding across the country is an unprecedented abandonment of the responsibility to protect the public health care system,” says Dr. Sally Mahood, a practicing family physician in Regina and Associate Professor of Family Medicine at the University of Regina.  “There will be more inequality in how Canadians access health care and these massive cuts halt any ability for our public health system to expand home care, prescription drug coverage and primary care that Canadians need and deserve.”