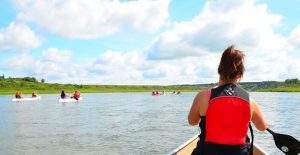 Participants from across the province have launched canoes into the South Saskatchewan River today, embarking on a three-day voyage that will navigate more than 70 Kilometres of waterway by canoe and land at the Métis community of Batoche. Hosted by CUPE Saskatchewan and its Aboriginal Council Committee, the annual canoe trip has been held since 2003, as river conditions allow, and coincides with the Back to Batoche festival held at the historic site of the Battle of Batoche during the Northwest Resistance of 1885.

The union-led canoe trip seeks to build solidarity, promote cultural understanding and advance reconciliation as participants learn about the vibrant culture and traditions of the Métis, revisit the sites and history the Northwest Resistance, and travel the way of early bison hunters and fur traders to explore the waterway and surrounding lands that are the homeland to the Métis and Indigenous peoples within Treaty 6, including the Cree, Assiniboine and Saulteaux.

In 2010, CUPE Saskatchewan signed a landmark partnership agreement with Métis Nation Saskatchewan to promote greater participation and recognition of Métis peoples within the public sector workforce, to expand cross-cultural awareness and to increase cooperation in other public policy areas of mutual interest such as advocating for access to safe drinking water, educational opportunities and environmental stewardship.

Learn more about the 1885 Northwest Resistance through the Virtual Museum of Canada, published by the Gabriel Dumont Institute, available at the following link: www.virtualmuseum.ca/sgc-cms/expositions-exhibitions/batoche/html/about/index.php

The Voyage Back to Batoche. Navigating the South Saskatchewan River Through History.