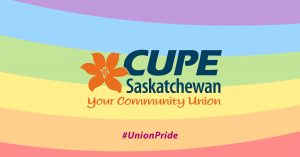 June is Pride month. As Saskatchewan’s community union, CUPE proudly celebrates diversity and the role unions play in making our country a more fair and inclusive place for everyone. In the workplace and in our communities, unions are at the forefront in protecting LGBTQ2s+ workers from discrimination and harassment, advancing human rights, promoting inclusion, and securing dignity and equality for all workers through collective bargaining and political action.

Join CUPE at a PRIDE parade near you!