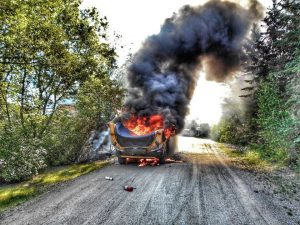 CUPE Saskatchewan joins the Prince Albert Fire Department in commending the rapid actions of CUPE member and school bus driver Mark Jenkins, who ensured the safe evacuation of 16 students from their bus before it was engulfed in flames on June 15. Jenkins is a member of CUPE Local 4195 representing education support workers in the Saskatchewan  Rivers Public School Division.

“We salute Brother Jenkins on his dedication to ensuring the safety of these kids,” says CUPE Saskatchewan President Tom Graham. For more information on the incident, see the article published in the Saskatoon StarPhoenix and Regina Leader-Post.