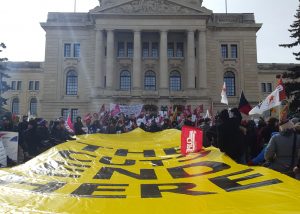 CUPE members will see four takeaways from the provincial  budget that maintains many of the drastic cuts from last year’s budget. CUPE Research provides a detailed analysis of the Saskatchewan provincial budget by sector.

1. No relief for CUPE members or working people

For CUPE members, the budget provides no or little relief after the massive austerity cuts last year. While some people may feel relieved that there weren’t drastic cuts like last year, funding for most sectors is at 2016-17 levels. The increase of $30 million to K-12 education is welcomed but falls short of replacing the $54 million cut last year. Public sector employers’ costs have increased and there is no additional funding to recover from last year’s disastrous budget.

The government is increasingly relying on regressive or unfair taxation instead of ensuring that corporations and the wealthy pay their fair share. Revenues from Corporation Income Tax, for example, decreased from $1 billion in 20 15-16 to $621.1 million in this year’s budget. Revenues from Provincial Sales Tax (PST), on the other hand, increased from $1.29 billion in 2015-16 to $2.16 billion this year. This shift towards consumption tax revenues hurts working people the most because they will spend a greater proportion of their income in PST.

The government has prioritized infrastructure spending over public services, boasting it will spend $2.7 billion on infrastructure in this budget. For example, the government will spend more on the Regina P3 Bypass ($330 million) this year than total municipal revenue sharing grants for 779 municipalities in the province ($241.1 million). There is capital funding to complete the Jim Pattison Children’s Hospital and the new Saskatchewan Hospital North Battleford but no funding for additional front-line staff in health care, who have struggled for years under heavy workloads and understaffing. Funding for maintenance and interest costs of P3 schools increased by 39%, but operating funding for schools is below 20 15-16 levels.

4. Government is offloading its deficit onto others

The Sask Party may pat itself on the back for bringing down the deficit without higher taxes but they are simply downloading the deficit onto other levels of government, public sector organizations and individuals.

Municipalities have dealt with the cuts in funding this and last year by increasing property taxes and various fees. Universities have increased tuition, making post-secondary education less affordable. Post-secondary students are paying more tuition and have lost several grant programs and the tax deduction for tuition.

For more information on the budget analysis by CUPE Research and sector breakdowns, view the following: