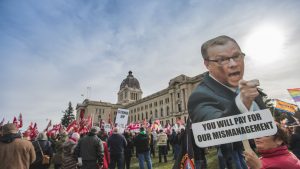 On the day the Legislature opened for its fall sitting and the provincial government delivered its throne speech, hundreds of CUPE members and concerned Saskatchewan residents rallied in opposition to the far-reaching consequences of the 2017 provincial budget. Rally participants called on the provincial government to reverse its harmful cuts and stop the privatization of Crowns and public services. 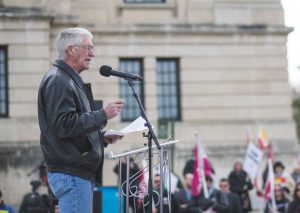 Labour and community leaders, including CUPE Saskatchewan President Tom Graham, signed the October Declaration –  a pledge to work together to protect our Crowns and public services from privatization and cuts, and to stand up for vulnerable community members who are most affected by these cuts.