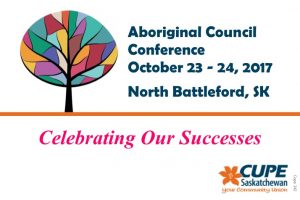 The annual CUPE Saskatchewan Aboriginal Council Conference will be held on October 23 and 24, 2017, at the Event Centre, Gold Eagle Casino, in North Battleford, SK. This year’s conference theme is: Celebrating Our Successes, highlighting the advances made and change achieved through activism.