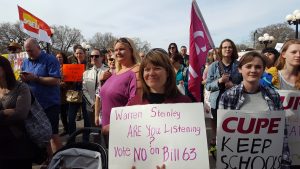 Education Counts Rally: May 3, 2017 in Regina, SK at the Legislature

REGINA: The Government of Saskatchewan has passed Bill 63, which amends The Education Act to give the Minister of Education more power and reduce the autonomy of school divisions.

“This government has shown little respect for our children’s education and for the voices of communities and local officials,” says Jackie Christianson, chair of CUPE Saskatchewan’s Education Workers’ Steering Committee. “Bill 63 will decrease transparency and accountability and concentrate power into the hands of the Minister of Education.”

CUPE was just one of the organizations expressing concern about Bill 63. Thousands of people joined rallies about this issue and wrote letters to their MLAs.

“The lack of public consultation around this bill has been appalling, and the government did not listen to the many, many concerns that were raised by the public,” said Christianson. “From bus routes to what kind of toilet paper divisions buy, the Ministry of Education now has complete control of our children’s education and the ability to ignore our locally elected school board trustees thus eliminating the voices of parents and the community.”

Bill 63 comes on the heels of a provincial budget cut of $54 million from school divisions’ operating funds and demands that the divisions roll back workers’ wages by 3.5 per cent.

“The provincial government is forcing school divisions to make tough decisions, with many divisions having no choice but to look at layoffs and programs cuts,” said Christianson. “It is clear that the Sask Party plan for education is leaving our children behind.”