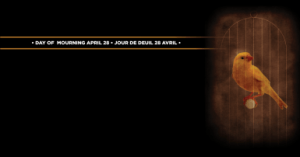 April 28 is a National Day of Mourning to remember those who tragically lost their lives while at work and recognize those who endured an injury or acquired an illness as a result of their work. We remember those we have lost, and renew our resolve to defend and improve workplace safety standards.

Attend a ceremony in your community. Click here for events.

Last year, 31 people died on the job in Saskatchewan and over 29,000 injury claims were filed with the Workers’ Compensation Board, which does not which does not include agricultural related deaths that occurred in the province.

This year, CUPE joins the Canadian Labour Congress in calling on the federal government to mark the 25th anniversary of the Westray disaster by enforcing the law of the land. On May 9, 1992, an explosion at the Westray Mine in Pictou County, Nova Scotia killed 26 miners working underground. It was one of the deadliest mining disasters in Canadian history and led to new Criminal Code provisions – known as the Westray Law – that made it possible to prosecute corporate criminal negligence. However, too many workplace fatalities are still never properly investigated and only a handful have resulted in criminal charges. Find out more at: rememberwestray.ca and and sign the petition calling on the federal government to act.

It was 33 years ago that CUPE’s National Health and Safety Committee first proposed the idea of observing a National Day of Mourning for workers killed or injured on the job. April 28 was proclaimed by then-National President Jeff Rose at a health and safety conference in early 1985. In the same year, the Canadian Labour Congress and affiliated unions adopted the day across Canada.