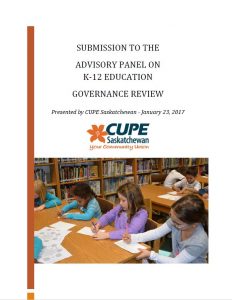 REGINA: The public comment period to the advisory panel on education reform has ended, but CUPE vows to keep voicing its concerns about the proposed restructuring.

“Frontline workers, who have already had hours reduced because of government funding cuts, are concerned that restructuring will remove community accountability, create unstable labour relations, and most importantly, lower the quality of education for students,” said Tom Graham, President of CUPE Saskatchewan. “CUPE supports the status quo of maintaining the existing 28 elected school divisions. Perrins’ report has not provided any evidence or rationale for further amalgamations.”

The Government of Saskatchewan tasked a six person advisory panel to review the recommendations of Perrins’ report and set a course of substantial change to K-12 education in a matter of weeks. Many of the options presented in Perrins’ report will drastically reduce the number of school boards and replace democratically elected and accountable school boards with government appointees who will be accountable only to government.

“The goal of ‘transformational change’ in education should not focus on cost savings but on improving the delivery and quality of education to children, their families, and communities. Education is a public good and fundamental for a democratic society,” said Jackie Christianson, an education assistant and chairperson of CUPE Saskatchewan’s Education Workers’ Steering Committee. “The interests of children are best served with school boards that are democratically elected and accountable to communities.”

CUPE is also concerned that the consultation process to date has been inadequate.

“The consultation process has been rushed, and to date has not offered any meaningful opportunities for parents, teachers, support staff, students, or community members to engage,” said Graham. “Additionally, the report is silent on labour relations issues. With many of our locals about to engage in collective bargaining, this process creates significant uncertainty around what the workplace will look like in the future.

“As residents of this province, we should all be concerned about what the proposed sweeping changes will mean for our children,” added Graham. “Any restructuring will create massive disruption to our education system. Ultimately, children and parents will lose education support in the schools and access to their democratically elected trustee.”

CUPE will be presenting this brief in person to the advisory committee on Wednesday, January 25, 2017.