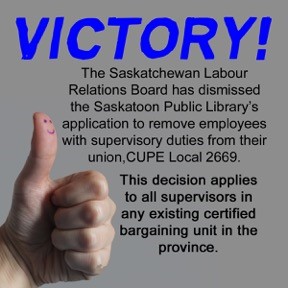 REGINA: The Saskatchewan Labour Relations Board (LRB) has dismissed the Saskatoon Public Library’s application to remove employees with supervisory duties from their union, Local 2669 of the Canadian Union of Public Employees (CUPE). In this test case of a controversial provision in The Saskatchewan Employment Act (SEA), the LRB ruled that section 6-11(3) of the SEA, SS 2013, c S-15.1 applies only when a union seeks to represent a newly organized group of workers. The LRB also ruled that it has no jurisdiction to hear an employer’s application to remove supervisors from an existing bargaining unit.

The LRB noted that the SEA prohibits employer influence in employees’ choice of a union, any employer coercion that may affect an employee’s choice to belong to a union, and any employer interference in the administration of a union. Finally, the LRB stated that permitting employers to exclude supervisors from existing bargaining units would deprive these employees of their union representation and their rights under negotiated collective agreements, including such fundamental rights as seniority, negotiated wage rates, holiday and sick leave, insurance benefits, and pensions.

“This decision illustrates what CUPE has been saying for a long time: Working people have the right to belong to the union of their choosing,” said Tom Graham, President of CUPE Saskatchewan. “We are pleased that the LRB has recognized this right.”

“We told this government over and over that we had serious concerns about the legality of this legislation, but they didn’t listen to us,” said Graham. “I hope they learn their lesson and seriously examine future legislation they bring forward – including their latest schemes around opening up signed collective agreements. This government track record in the courtroom is not in their favour.”