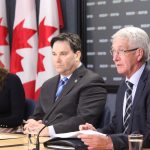 The federal government should stop private for-profit companies from collecting and selling our blood products, including plasma. This is the message CUPE and other blood safety and public health care advocates delivered Tuesday on Parliament Hill.

“We are asking for a moratorium on all licenses granted or pending to Canadian Plasma Resources so we can secure the safety and integrity of our Canadian blood supply, as it has been acknowledged that none of the plasma collected by these new private blood brokers will benefit Canadian patients,” said Kat Lanteigne, executive director of BloodWatch. “This is an urgent and pressing issue that Minister Philpott needs to address in an open and transparent manner.”

Speaking at a press conference with NDP Health Critic Don Davies, advocates including the Canadian Health Coalition and the Canadian Federation of Nurses expressed their concern with private, for-profit blood clinics, especially during a time when Canadian Blood Services is trying to expand their plasma collection sites.

Tom Graham, president of CUPE Saskatchewan, voiced CUPE’s concerns about Canada’s ability to secure our domestic supply of plasma. Saskatchewan is the only province where a private for-profit plasma collection clinic is currently operating, and it is important to prevent this bad idea from spreading.

“The current private plasma collector will sell all the plasma they collect to the highest international bidder, giving Canada no guarantee of improving our own supply,” said Graham. “And paying individuals for their plasma will only reduce the number of potential donors in our voluntary, public blood supply system.”