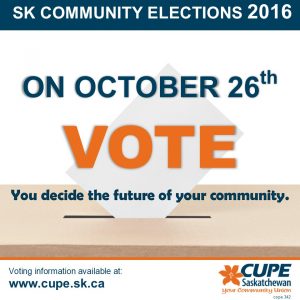 Elections for municipal officials and school board trustees are taking place in communities across Saskatchewan on Wednesday, October 26, 2016.

Your vote on October 26 can decide the future of your community.

The decisions, policies and budgets made by local elected officials affect our everyday quality of life and determine access to public services. As CUPE members, it’s important that candidates support the work we do to deliver public services that strengthen our communities and enrich people’s lives.

Click here to find out when and how to vote.

Click here for profiles of progressive candidates running for election.

The following are progressive candidates who support working families running for election:

The following is a list of candidates in Regina that have been endorsed by the Regina and District Labour Council:

Election information for Saskatchewan’s cities can be found below: