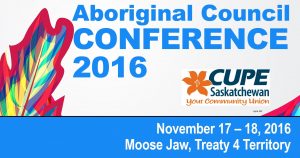 Registration is now open for the Aboriginal Council Conference 2016 to be held November 17 – 18, 2016 at the Temple Gardens Hotel in Moose Jaw, Treaty 4 Territory.

Open to all CUPE members, and members of other
unions as well, the CUPE Saskatchewan Aboriginal
Council Conference seeks to build union activism with a focus on equality and rights for Aboriginal people in our workplaces and communities. This year, participants will focus on building on past gains to create a better future for everyone.

NOTICE OF ELECTIONS: Elections to CUPE Saskatchewan’s Aboriginal Council Committee and the Aboriginal Member (and Alternate) to the Executive Board will be held at the conference.