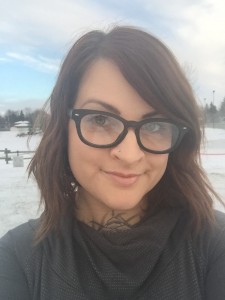 Cannon is in her 13th year of nursing and has worked in a variety of capacities in the health sector. She has gained experience in surgical nursing and palliative care, but upon the birth of her eldest son, decided to move into the mother-baby unit. She was one of the first LPNs to work in neonatal care in Canada, as part of a special Calgary based pilot project.

“What motivates me at work is to make everyone feel accepted and that they belong there. I believe everyone, no matter their background, deserves respect. Whether you are a high-ranking CEO or a person struggling with addictions – you should receive the same care,” said Cannon. “That’s how I treat my patients; like my friends, like my family.”

The biggest challenge at work is seeing people receiving unequal treatment. “I really think that the reason I was nominated is that I treat everyone with the utmost respect. Respect is a choice. Maybe I don’t agree with what a patient is doing, but it’s not my place. I don’t live their life.”

Cannon’s favourite part of the job is working with newborn babies.

“It’s a pretty big honour to be with someone when they need you. You start as a stranger, and people put their trust in you as a health care provider.”

Having worked in palliative, surgery, and mother-baby care, Cannon reflects that it is a huge honour to be with people in their vulnerable lifetime moments.

“To be with patients and their families at their bedside, to be with people who are scared and sick, to be with new parents is just an honour. I am humbled to be there for people in these moments.”

Cannon says that the one thing she would improve about the workplace is the ability for her to utilize all of her skills and work to full scope.

“I’ve worked in a lot of different environments, and I’ve always had to prove myself. I would love it if everyone understood that there’s a place for everyone.

“LPNs sometimes aren’t respected for the education, skills, and knowledge that we have. But as health care providers, as a team, we are much stronger together than divided, and the patients will benefit from us working more as a team.”

So, what’s it like for Cannon to win “Best Nurse” in Regina?

“I’m just super humbled and grateful; it’s a bit of a shock. It’s wonderful to get recognition when you feel like you try to do your best every day that you walk in.”