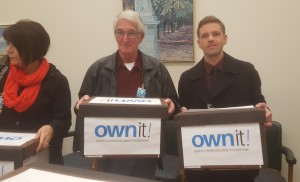 REGINA – 19,346 Saskatchewan voters have signed an online and physical petition

saying no to privatization. Today the Own It! campaign and the Saskatchewan Federation of Labour (SFL) delivered 17,247 physical petition signatures to the Legislature, calling on the Sask Party government to stop its risky and costly privatization agenda.

“The Sask Party government has outright sold a number of crown corporations, weakened our utility crowns, and has privatized bypasses, hospital laundry services, correctional food services, MRIs, and is even building privatized schools and a privatized prison,” said SFL President Larry Hubich. “The broad support for this petition demonstrates that there is no appetite in Saskatchewan for privatization,” he added.

This petition is one of the largest in Saskatchewan’s history, and shows that Saskatchewan voters are looking for investment into their crowns and public services, not a sell-off to out-of-province corporations.

“This is the last Legislative sitting before next Spring’s provincial election,” said Hubich. “This clearly shows that it doesn’t matter which party wins the upcoming election, no government has a mandate to privatize and take away the benefits of strong crowns and public services,” he added.

In addition to the 17,247 Saskatchewan voters from 447 communities that signed the physical Own It! petition, 2,099 signed the online petition. All of those who signed the petitions are expecting the Sask Party government to stop its privatization schemes and instead invest in Crowns and public services.

The SFL represents over 100,000 working people across the province in 37 affiliated unions.